Written and edited by Edwin Carels
published by Tommy Simoens, Antwerp and Ludion

In the mid-Seventies the influential stop-motion animators, Stephen and Timothy Quay, embarked on a series of dark graphite drawings, conceived as imaginary film posters. They kept their first autonomous art project hidden for decades, allowing only a few glimpses to transpire in some of their animation classics such as Nuctura Artificialia and Street of Crocodiles. In hindsight, the Black Drawings can be considered as a blueprint for their future work. This book offers a first in depth exploration of this important graphic series that reveals many of the themes and techniques that would come to life in their celebrated animation films.

The Quay brothers (Stephen and Timothy Quay; born June 17, 1947) are American identical twin brothers and influential stop-motion animators. They have been the subject of a grand retrospective exhibition at the Museum of Modern Art, New York, entitled “Quay Brothers: On Deciphering the Pharmacist’s Prescription for Lip-Reading Puppets” which featured work spanning their entire career, tracing back as early as childhood, with much of the material shown for the first time. They are also the recipients of the 1998 Drama Desk Award for Outstanding Set Design for their work on the play The Chairs. 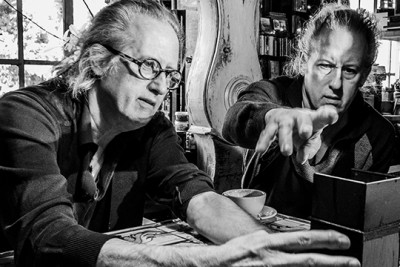